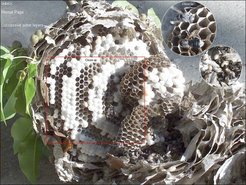 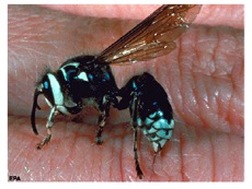 The baldfaced hornet, known to some as a yellow-jacket, is endemic to North America and has a range from Canada to the US and is found on the west coast, the southeast coast, and the southwestern states of  the US (Kosmeier, 2010). According to Kosmeier, D. maculata are not true hornets but are large, (around 3/4 of an inch long), black and ivory wasps that construct paper-like nests out of chewed up wood and saliva. These wasps are typically identified by a pale marking on their head, giving them their common name, and also by dark colored membranous wings and three white or ivory stripes at the end of their abdomen (Oswalt et al., 2003). Their nests are typically the size of a large basketball and are usually aerial, although they can be found under porches or decks. The papery nests house up to 700 of these insects (Painter, 2014).

The nests are initially constructed by a new queen wasp who has mated with a male and emerges in the spring to begin construction of what will be her colony (Oswalt et al., 2003). The young queen begins her nest by creating 'cells' of paper that she will lay eggs into. These eggs eventually become larvae, which then pupate and develop into adult female worker wasps. These workers build new cells for the queen to lay eggs into, feed young wasps, and protect the colony (Painter, 2014). The workers also collect food, which usually consists of other insects, tree sap, fruit juice, and nectar from flowers. 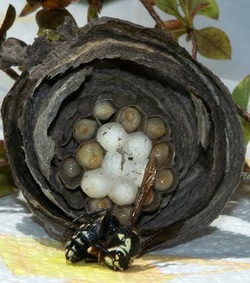 Baldfaced hornets, like other Hymenopterans, have a caste system which includes a queen who lays eggs, the workers, who are females and whose roles are discussed above, and males, who are without stingers and are meant to mate with the future queen wasps. The males in the colony are haploids, meaning that they developed from unfertilized eggs and have only one set of chromosomes (Kosmeier, 2010).

In summer months, usually July-September, male wasps and the new queens mate and leave the colony (Oswalt et al., 2003). The newly mated queens typically find shelter in a log and survive the fall and winter there, planning to start the cycle over in the spring. The old queen and her workers die in the fall and leave the nest abandoned. It is very rare for an abandoned baldfaced hornet's nest to be re-occupied by a new colony of wasps. 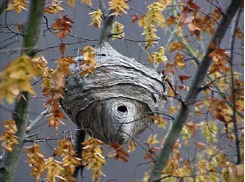 According to Painter, baldfaced hornets have several predators, which include birds, spiders, frogs, mantids and other insects, and small mammals. Raccoons, foxes, and skunks commonly attack nests if they are low to the ground. Humans also are involved in the destruction of wasp nests, usually if the nesting D. maculata become a nuisance or built their colony close to human structures (Oswalt et al., 2003).

Baldfaced hornets may become very aggressive if their nest is approached by a human, and female workers may attack the intruder with their stingers. Besides stinging and biting, D. maculata have the ability to spray venom in the eyes of predators. The sting of this insect is similar to other bees and wasps, and usually results in localized pain and swelling if the individual in not allergic to the venom. 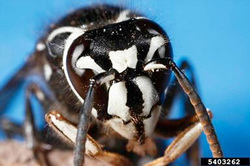 The best way to remove problematic baldfaced hornet colonies is to spray the nest with aerosol insecticide at night or in low light conditions because the wasp activity levels will be reduced.