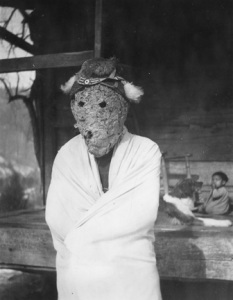 Besides using the nests of baldfaced hornets as masks in the Booger Dance, Cherokee people also used the larvae of yellow-jackets as a soup delicacy, included them in mythology, and benefited from their natural pest control.

In order to make wasp soup, Cherokee people would heat the nest to loosen larvae, then would pluck them from the papery nest and brown them over the fire before adding them to broth (Ellison, 2006).

The yellow-jacket also has an origin given in Cherokee mythology
(Mooney, 1900). The story features an enormous insect called U'la`gû', which was the size of a longhouse and would fly by villages and steal children for snacks. Hunters and warriors of the tribe decided to stop this insect and baited it using a deer tied to a long white string. The insect flew off with the deer meal and was able to be followed due to the string being attached to the prey it snatched. The warriors stalked the insect until they found its home, a cave, which was filled with a nest of many smaller insects just like U'la`gû'. The warriors built fires under the cave's entrance and suffocated U'la`gû' and many of the smaller wasps with smoke. The insects that escaped the fire spread into the forest and throughout the world and became what we now know as yellow-jackets.

It is also important to note that the Cherokee people, (and those currently living near baldfaced hornet habitats), also benefit from the natural pest control the wasps perform by feeding off of certain pests such as flies, caterpillars, and spiders (Oswalt et al., 2003).